Initiators, Coordinators, the Team, and Partners[edit]

AWOB, the Astronomer's Workbench, is a web based collaboration-data evaluation-publication-platform which helps scientific working groups of any size to enhance the communication and to share resources, data, results, publication texts etc. throughout the whole scientific life cycle.

Resulting e-publications and publications to the Virtual Observatory allow long term archiving of data, the annotation of metadata as well as easy access of digital outcomes by other users.

The AWOB project has a duration of 3 years and is based on experiences made by the German Astrophysical Virtual Observatory (GAVO).

AWOB and the Scientific Life Cycle[edit] 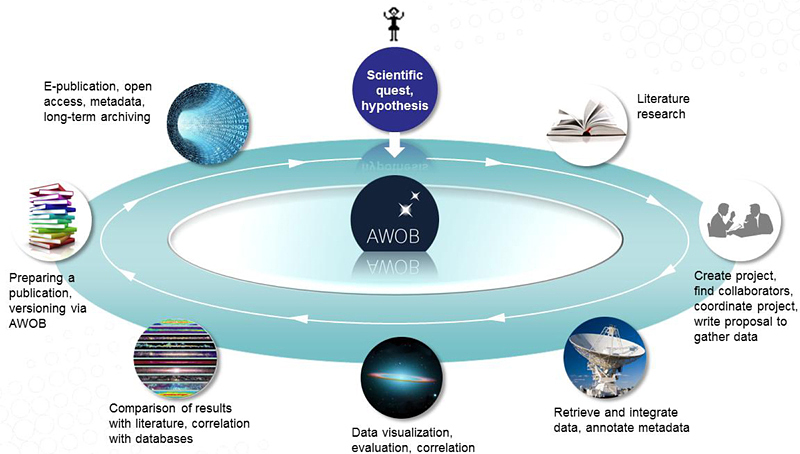 Typical scientific lifecycle in astrophysics. The whole lifecycle is supported by AWOB. Copyrigth for the multi wavelength image of the Milky Way image illustrating "correlation with databases": NASA (National Aeronautics and Space Administration), Goddard Space Flight Center. Within this reference you can find the references to the individual observations. Copyright for the M 104 mid infrared image illustrating "data visualization": NASA/JPL-Caltech/R. Kennicutt (University of Arizona), and the SINGS Team

Download a PDF File with a generally understandable public intro to the Astronomer's Workbench. The slides contain supplementary information to this page and some images.

Situation and Challenge in Today's Astronomy[edit]

Astronomical research is increasingly organised in projects that can include hundreds of collaborators, often spread out over the globe. In collaborations of any size the task of sharing resources such as data products or images and texts for publications can be very cumbersome. The raw data of many observatories have to be evaluated carefully to get reasonable scientific results like calibrated images. Since the programs of such pipelines remain normally unpublished, it is difficult for users not familiar with a certain instrument to mine the data.

Example of a Typical Astrophysical Quest: A Multi Wavelength Study of NGC 3079[edit]

Multi wavelengths studies of objects allow a holistic view. Often, objects are observed by different groups at different wavelengths. The following images, e.g., combine optical, radio, and X-ray data of the edge-on spiral galaxy NGC 3079. The data reveal hot gas in the halo of the galaxy. The gas is thrown out of the disk into the halo by a super bubble of ionised gas. The images shown are based on the following data: Images with contour plots, image 1 and 2, on optical data (Digital Sky Survey, DSS), X-ray data (Pietsch et al. 1997), and radio & H-α data (both Veilleux et. al 1994). The false colour image shown in image 3 is based on Hubble Space Telescope and Chandra (X-ray) observations. The copyright belongs to NASA/CXC/STScI/U.North Carolina/G.Cecil. 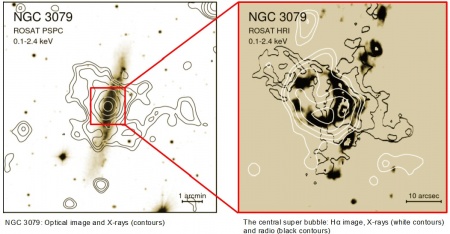 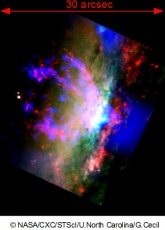 The Idea of an Astronomer's Workbench[edit]

The project Astronomer’s Workbench (AWOB) aims to assist astronomers in these tasks by building a web based platform that will enhance the communication between the scientists and support the centralised organisation and collective usage of resources, ideas, data, results, and documentation. Use of AWOB should significantly improve coordination of these collaborative projects from their initial formulation to their completion as a publication. An additional focus of AWOB is to facilitate the publication of the project data to the astronomy community, both using Virtual Observatory (VO) standards, and as enhanced e-Publications.

To support the mentioned idea of AWOB, the platform will contain the following main functional components:

AWOB has grown out of two main developments. On the one hand there is the International Virtual Observatory Alliance. Developments in its German node, GAVO, have lead us to see the importance of centralised organisations of data long before final publication is taking place. Also requests for collaborative environments and self-publication of data were made to us. On the other hand the MPDL has developed tools dealing with concerning sustainable long term archiving of research data, the integration of external tools and services, and the conception of user centred working environments.

Having said this, AWOB is extending the assistance for scientists to the whole scientific life cycle from group-building and data acquisition to e-publications and long term archiving. The implementation of AWOB is thereby supported by the tools and infrastructure already developed by the MPDL.

The project is structured in three phases: Phase one will focus on building a demonstrator and subsequent first release of the community platform together with two project partners (MPE and MPA). Phase two will focus on active outreach to the astrophysical community within the MPG and other organizations, to gather necessary feedback on extensions, improvements and their priorities. Other potential partner institutes will be invited to join the project and we will interact with the Scholarly Workbench working group for sharing experiences and potential collaborations. In Phase three, resulting in the final AWOB release, we will focus on the holistic scenario of an enhanced publication, i.e. publishing projects, data, and publications. In addition, we will design and incorporate additional tools and interfaces to external systems and databases and produce the final AWOB release. Some of these extensions will be based on the feedback received during the previous phases. In this last phase particular attention will be given to activities concerning outreach and training to MPG and other external communities. This will enable a larger community to use this collaborative platform or parts of it for their own purposes. Finally a cost model will be developed to ensure long term sustainability of the AWOB community platform.

A Liferay based Demonstrator of the AWOB platform was available in Nov 2011. With this Demonstrator, we adressed our associated scientists who performed the first testing of the platform.